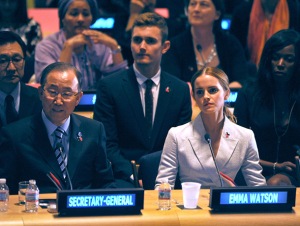 On September 20th, 2014, Emma Watson, the UN Women Goodwill Ambassador, launched the HeForShe campaign by delivering a speech about feminism and gender equality at the UN. It was well received, with several media outlets calling it “game changing.” Not unexpectedly, there was a backlash, including one particular 4chan user who threatened to leak nude photos of the Harry Potter actress. He set up a countdown clock site, however, instead of the photos, the site revealed it was a viral marketing campaign by Rantic Marketing in an attempt to shut down 4chan and censor the internet. The site talks about the recent nude celebrity photo leaks and states that “none of these women deserve this and together we can make a change.” A couple of hours later, this, too, was determined to be part of the hoax started by the person, or people, behind SocialVEVO (AKA Swenzy) and Fox Weekly (not affiliated with Fox Entertainment). The Rantic site has added a disclaimer stating it is not associated with SocialVEVO, but who knows what to believe anymore. END_OF_DOCUMENT_TOKEN_TO_BE_REPLACED