After reading Lance Ulanoff’s piece about live tweeting in Mashable yesterday, I decided to address one question

he did not: are there times when it’s best to not live tweet an event? While researching the question, I stumbled upon a “Not-The-Onion” level of craziness from the United States in early May. Apparently, the Prince George County Police Department (PGPD) media relations team decided it would be a great idea to live-Tweet a prostitution sting in Maryland, and, that it would be even better to announce the event in advance. To make matters worse, their blog announcement stated that they would target “those soliciting prostitutes” but their accompanying image, which was subsequently removed from their website, showed a woman being led away in plastic handcuffs. The backlash on Twitter and in the news media was swift and harsh. These tweets, featured in a Vox piece, capture the sentiment well:

After the media uproar, PGPD thankfully decided to nix the idea, and, even more sheepishly, had to admit that the advanced notice made prospective johns stay away. So much so that when they finally did do their non-tweeted sting, they were unable to arrest a single person.

Despite this epic fail, ABC News reported that PGPD has live-tweeted at least a dozen operations in the past and has stated it plans to continue these “TweetAlongs.” On the surface, this seems like a terrible idea, but after perusing their Twitter feed @PGPDNews, I understand what they’re trying to accomplish. As PGPD spokesperson, Julie Parker, explained to HuffPo, the “TweetAlongs” are an attempt to create a sense of transparency and openness with the public. In addition, they get to take charge of their own narrative. “Basically, rather than having the traditional media tell the story for us, we are telling our story [through social media]” she said.

This is clearly still an experiment and the success of these posts varies. Some, like a series of three tweets that occurred during a call to deal with an armed, and potentially violent or suicidal teen, are extremely evocative:

What makes these tweets successful, is they show details of the case from the officer’s point of view, as it unfolds, without identifying the family involved or releasing other sensitive information. Other successful live tweets include ones that show officers performing their duties as both law enforcement personnel and public servants: 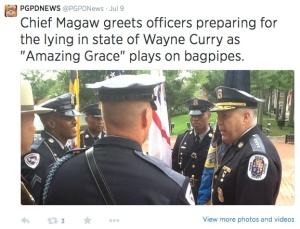 Indeed, based on the last couple of months-worth of tweets, their approach to live tweets is largely successful and respectful. Unfortunately, their feed also includes tweets like this planned one:

This is where things get…ethically uncomfortable. While it’s true that news media outlets show footage of people who are being arrested and charged all the time, it feels a bit different with social media. TV news is, traditionally, over in a flash, a newspaper photo is only news for a day, and shows like Cops, while also problematic, at least have to get all participants who speak on camera to sign a consent form before they can show their faces. No such rules exist for social media, and, as we all know, it has a permanence that other media do not. It begs the question whether posting pictures of people being arrested, before they are even charged or found guilty, is fair. This was one of the biggest criticisms of the proposed prostitution sting “TweetAlong.” People who are already vulnerable and marginalized could face long-term stigmatization, thereby negatively affecting their ability to improve their lives. While I am neither a lawyer nor an academic, I believe this is a situation that needs to be explored with the possibility of finding protection for people under privacy laws.

Until such conversations occur, PGPD, and indeed other North American police forces, only need to consider these posts’ effects on their public relations and marketing efforts. Even so, they should tread carefully. While it can send a positive message to the community of being tough on crime, it can, and I believe is, seen as hostile and threatening to the populations who find themselves disproportionately on the wrong side of the law. Building relationships and gaining their trust and support is of paramount importance and tweeting in this fashion or threatening to live tweet sting operations are a significant setbacks. To answer my original question, yes, there are most certainly times when it is best to not live tweet. PGPD is, in many ways, doing a great job on Twitter. Hopefully recent events will help them strike a better balance between transparency and privacy.